Replicate the Augusta National Green Speeds in Your Backyard

Getting an accurate speed for the greens at Augusta National is next to impossible, but how hard is it to replicate?

It’s been rated as the number one course in the country, and its fairways, greens, bunkers and water hazards have been seen by more eyes than any other course in the world.  Yet, the track in Augusta, Georgia known as Augusta National Golf Club is one of the most exclusive and closely guarded golf courses in the world.

And while it may not be the most exclusive golf course in the world (we?re not saying it isn?t), it certainly has the perceived reputation as being one of the toughest.

The fact is no one really knows for sure just how tough it is.  This is because the club has forbidden Augusta to be officially rated by the United States Golf Association.

But in 1991, a team of experts descended upon the hallowed grounds to do just that.  Led by the late Ross Goodner and the inventor of the course ratings system, Dean Knuth, the group set out to provide those of us who would never set foot between the ropes of Augusta a rating for the course.

In 1991, Goodner and company rated Augusta National at 76.2, which basically meant that a scratch golfer could expect to shoot around 76.   At the time this would have made Augusta National one of the ten toughest courses in the United States.

Then in 2010, Knuth set out to re-rate Augusta, and he is very good at what he does.

He walked the course over the three practice rounds to establish that the course rating had increased to 78.1, still one of the ten toughest in the United States.  This is due, in no small part, to the course being lengthened by more than 500 yards since 1991.

But Knuth also provided an educated guess at the stimp speed of the greens.  Stimp speed measures how far a ball will roll when gravity pulls it down a ramp angled at about 20 degrees.  He arrived at 12 feet, basing this on counting the number of paces players were walking on the greens during those practice rounds.

The greens at Augusta have the reputation for being some of the fastest in the world.

One of the primary reasons for this dates back to 1980, when the greens at Augusta National changed from Bermudagrass to Bentgrass because officials there felt it would produce a more consistent option for tremendous green speed year round.

Now, several things make getting a stimp speed at Augusta impossible.  First, stimp meters aren?t allowed through the gates, making any stimp speed an educated guess at best.  Second, and probably more important, it is widely believed that there isn?t a long enough stretch of Augusta green that is perfectly flat.

One professional jokingly recommended rolling the ball uphill to try and get an accurate stimp speed.  Augusta officials don?t want this information to get out to the general public, and thus, they don?t gather the information for themselves.

So, since most people will never get the chance to play at Augusta, how will they ever know how fast the greens roll, and how ticklish every short putt can be?

Synthetic Turf International manufactures and sells the most realistic synthetic putting surfaces on the market today.  STI can provide a green that rolls true at a speed of 10.5 feet.

A putting green infilled with ceramic sand can roll true at speeds up to 14 feet. 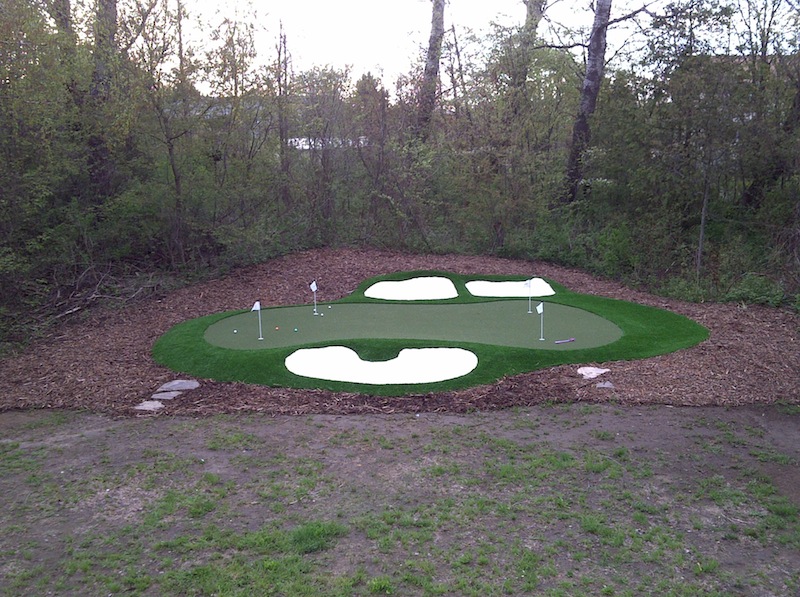 Our network of over 100 dealers can install a putting green that will meet your budget and exceed your expectations every time.

We can?t recreate the natural greens at Augusta National, but we can provide the closest synthetic putting surface to replicate greens like those found at Amen Corner, with stimp speeds, undulations and breaks as close to the real thing as possible.