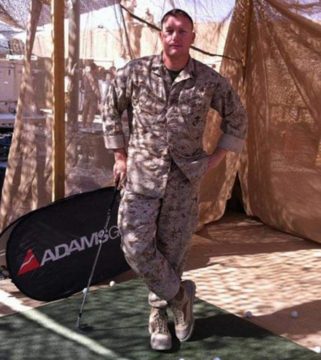 At the PGA Show this year our team was lucky to get to meet with a special person. This person is Master Sergeant (MSTG) Russell Normandin. MSTG Normandin is a decorated veteran who retired from the United States Marines after 20 years of service. MSTG Normandin was on a competition reality show called The Big Break. He was the first active-duty military personnel to compete on the show. Shortly after his time on the show he was deployed to Afghanistan.

The Big Break and Afghanistan

Before MSTG Normandin left for Afghanistan, the show sent him with a small piece of turf. This piece of turf was a Synthetic Turf International product, and it meant the world to him while he was deployed. While in Afghanistan, MSTG Normandin created a makeshift driving range with camping net and the piece of turf. He and many others stationed with him were able to utilize it. He and others spent numerous nights out hitting balls into the net. This helped him tremendously through a dangerous time in his life. When he returned home, the driving range stayed behind so that others could benefit from it the way he did. The turf stayed over there for several years after he returned home.

Heart of a Lion

Since returning home, MSTG Normandin has become an ambassador to a foundation that is very important to him. This would be the Heart of a Lion, John Daly – Major Ed Foundation. “The mission of the John Daly and Major Ed Heart of a Lion Foundation is to provide mental, physical, and wellness support to our nation’s children, first responders and Americas Veterans.” This mission statement can be found on their Facebook page along with posts to keep you up to date on what the foundation is doing! The founder is a two-time PGA major champion. This foundation was created to help veterans, first responders and children. MSTG Normandin is passionate about the work of the foundation and loves being a part of what they do.

The Impact of Something So Small

MSTG Normandin stopping by the booth to share his story was a major highlight of this year’s PGA show, and we feel honored we were able to speak with him. He told us that he never knew that such a small piece of turf could have such an impact and mean so much to him. Knowing that we could help him through such a time like that means the world.

*Pictured above is MSTG Normandin with the turf in Afghanistan