A Great Space for Children of all Abilities!

Synthetic Turf International (STI) Dealer, Park Place Recreation Designs in Harlingen, Texas took on the project of laying synthetic turf for Hunter Park. The city decided to build an inclusive park for children of all abilities. The Park includes an Alta-Glide, which is a wheelchair-accessible glider, swing sets, and other site amenities. The city had originally decided to use wood fiber as the surfacing for the park. With some persuasion Park Place Recreation Design convinced them to decide on synthetic turf instead. 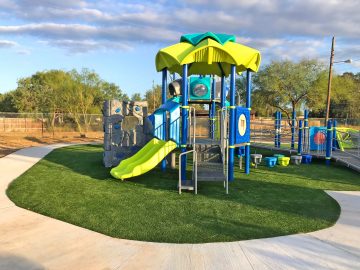 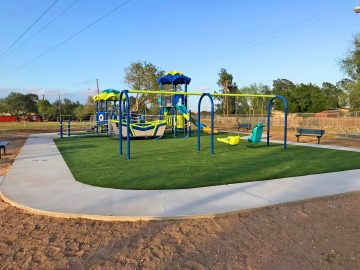 What Makes our Turf Suitable for Kids of all Abilities?

Our synthetic turf is ADA compliant which makes it a more accessible surface for wheelchairs and crutches. This is because it is a consistent surface until wood fiber or other playground surfaces. This makes is more compatible for wheelchairs. Our playground turf also has ChargeGuard™ which helps reduce static. ChargeGuard™ is built into the yarn and isn’t a second coating. Because it is built in, that means it will last as long as the turf does. You can also order playground pad to go under the turf to help add to the safety of the playground. A playground pad can be used to create fall zones to absorb some of the shock of the fall. These things are very important when it comes to creating a playground for kids of all abilities. 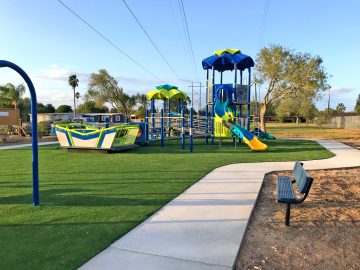 Most playgrounds do not accommodate kids with disabilities, so the city wanted to build a playground for kids of all abilities so that they could have a place to play with their friends. A mother was quoted in an article about the installation of the park that she would avoid driving past parks because it made her son sad that he couldn’t play with the other kids. With the synthetic turf surface, the city has given these kids a place where they can be included with no difficulties getting around.

Being able to create a space that all children can enjoy is important for development and making ALL kids feel included. Park Place Recreation Designs was able to help make that happen for the children of Harlingen, Texas.

This job won The Synthetic Turf Council’s Landscape Installation of the year award! The ingenuity and inclusivity of this design helped get it the recognition that it deserves!

Visit our application page for more information, browse our gallery for ideas and contact STI to “Experience A Greener World.”